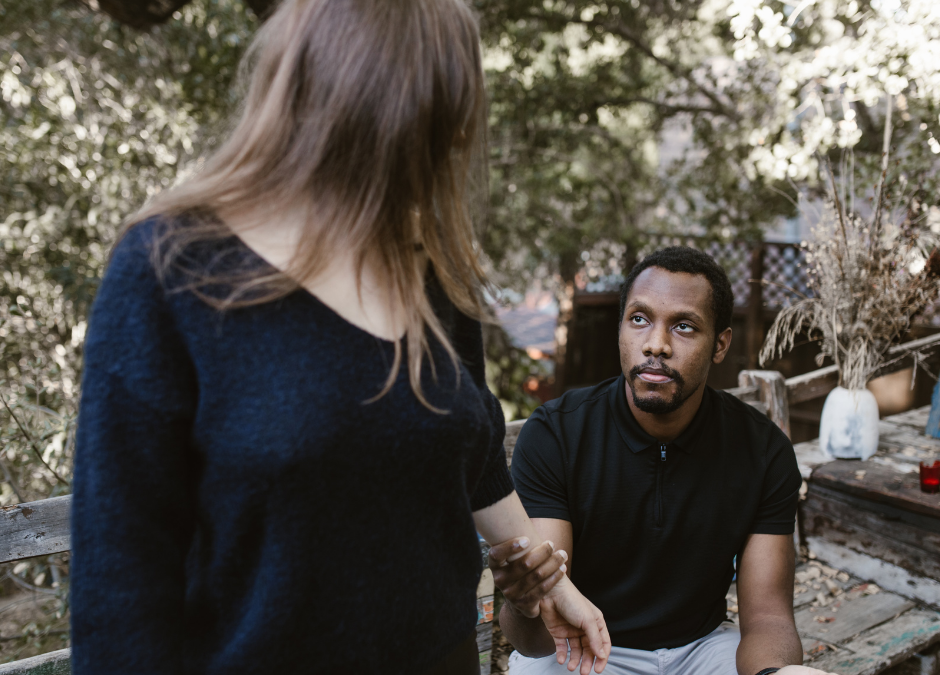 I dated someone once called Barry we met on a dating site and he seemed ed really nice and sweet. At the start of our courtship, we told each other we would deactivate out accounts on the dating site and exclusively see each other.  When I was around him he made me feel loved, special, and enough, like I was the only woman he wanted to see.  I felt amazing when I was with him, and I thought I had hit the jackpot by being with him.  Barry would take me to dinner, drinks, movies and special weekends and day trips away.  I offered to pay my share, but he wouldn’t allow me to pay for anything.  I felt like a queen as we had dancing, exercise, movies, food and music in common.  We got along like a house on fire and had some really deep and meaningful conversations about our future together.

He was so close to everything I wanted in a partner.  We spoke twice a week on the phone for 2 to 3 hours at a time, and he would text me special little good morning and good night text messages every morning and night to let me know he was thinking about me.

One time Barry told me I wasn’t opening up to him enough to him and that he felt like I was holding things back from him about my past, he made that entire conversation all about how he was feeling and himself.  This made me feel really bad and a little bit sad as I thought I had opened up to him quite a lot about things and it was early in our courtship together too.  So I opened up to him more about everything.  One particular thing I shared with him was about one of my previous serious relationships.  I did not think at the time that he would ever use what I had told him in confidence against me.

I remember I had made plans with a male friend of mine 2 weeks prior to Barry asking me to go and do something with him on the day I had the plans to catch up with my friend. We had planned to go and see a movie together. I told Barry I already had plans to go and see a movie with a friend and asked if we could do what he wanted to do the next day as I had not caught up with my friend in months and was really looking forward to catching up.  Barry then asked me if it was a male or a female friend I was catching up with.  I was honest with him and told him it was one of my closest friends who was a male and that nothing romantic ever happened between us as I did not see him  as anything more than a platonic friend and that I was not in the slightest bit attracted to in this friend of mine in any way. So that Barry knew exactly where things were at and would not get jealous or feel uncomfortable with my friendship.

Barry asked me to cancel my plans with my friend and hang out at his place with him instead.  I said no as I had not caught up with my friend in months and that I was looking forward to spending some time catching up with my friend. Barry then started to try and manipulate me and make me feel bad by throwing in my face the things I had told him about a previous relationship and why it did not work out.

It really hurt me because he had twisted everything, I had told him about that relationship and why it did not workout around to make out as though I was to blame for that relationship collapsing.  He was mean, vicious and crewel in what he said to me.

I was so upset and angry with him and we fought over it.  After we had finished fighting, he told me he did not want me to spend time with any of my friends anymore.  I think he was jealous and when he had no cause to be.  I told him I would not give up my friends just for him and I left his place and went home.  He left me feeling as though he did not trust me and that I was a bad person for having friends and wanting to spend time with my friends.

About 2 hours after I got home from Barry’s place Barry rang me and said so you’ll give up your friends right and I said no then he stopped ringing and texting me for 3 days and it made me feel even worse.  Once those 3 days had past, he texted me saying I have arranged a special dinner for the two of us I’ll pick you up around 7pm.

He picked me up at 7pm and we went to a fancy restaurant with candles lit up on the table where we were seated and there was really nice romantic music playing. During dinner Barry’s phone rang every 20 mins to notify him he had a message\text.  So Barry would sit there texting whoever it was back during dinner.  He said it was just his manager at work as he was on the on-call roster for his work. The evening ended and I thought nothing of it.

Every time we spent time together after that in the following weeks his phone would constantly ring to notify him of his messages, and he would always answer them back to the point where we couldn’t even sit and watch a movie or a TV show without it ringing constantly.  This started to bother me so one time I asked him if everything was okay as his phone was ringing a awful lot.  He then accused me of trying to read his text messages when was texting which I did not do as I trusted him even thought his phone was annoying me.  We had a few fights over this and then he said maybe we should call things off.  I said no and thought everything was fine between us after that.

I was speaking to a female co-worker of mine about him and how things were going, and she asked to see a photo of him.  I showed her and her jaw dropped when she saw his photo and she tole me it was because he was chatting her up on a dating site and she showed me his profile on that dating site from her phone and sure enough he did not deactivate his profile on the site we met on.  She also showed me his messages to her, and they were during the time we were seeing each other exclusively.

This explained why he didn’t like me having male friends and why he was so protective of his phone every time it notified him of new messages and also why he would turn his back to me or get up and walk away when he was sending and reading messages.

I was so heart broken by it.  It made me feel lost, angry, unloved, used and confused.  I guess he thought by accusing me of not trusting him it would get me off his back about why his phone was constantly going off.  I couldn’t believe that he had lied to me saying that his phone was going off as it was work contacting him as he was on call, and I bought it.

That night I got home from work, and I rang him and told him I needed a break from seeing him for a while and that I would contact him when I was ready to speak to him again.  2 weeks went by and it was my birthday and I kind of was hoping that he would at least contact me to wish me a happy birthday as he knew when my birthday was but he didn’t.  This hurt me deeply as it showed me he did not care about me at all.

It was in that moment I realised I needed to make a clean break from him and told him it was over and that I knew he was still on the dating site trying to pick up other women and that I deserved better.  He had no comeback to this at all.

The next day I packed up the stuff he had left at my place from before we took the break and took them down to the security desk on ground floor and told him to pick them up from there as I did not want to see him again.  Apparently, he never picked up his stuff and so they were put in the Vinnies bin for the less fortunate to claim.

From this experience I now know what the signs are to look out for as he was a liar, cheater and a narcissist.  I can spot those signs very quickly when seeing someone now and will get out quickly if I ever date someone like that again.

I learned that I deserve and am worthy of better in a man I am seeing and if they are accusing you of things, you are not doing then they are likely to be doing those things themselves.  If they are very protective of their phone that there may be something going on behind the scenes that I don’t know about.  That if you are truly exclusively dating or in an exclusive relationship with each other that you will share things with each other and not try to hide them from each other.  That if you don’t give them any reason to distrust you and they still distrust you that they are the ones hiding things from you as they are projecting their insecurities about being found out onto you as a protection mechanism to make out as though you are in the wrong and not them.

I am much happier and better off now without him in my life as his behavior was disrespectful to me and not good for my mental health.  I know now that when the time is right the universe will deliver the right man into my life.©